1984
First Junior team entered into Victorian Junior Association. Team entered in U17 Boys & was made up of boys & girls aged between 14 & 17. Junior section was organised by Stephen Hulme

1997
Agreement was signed, along with Croydon Hockey Club, to play all home games & train at new grounds that were to be built at The Knox School.

1997/98
During a meeting between the presidents of the Knox & Croydon Hockey Clubs to finalise ground sharing times for training & matches, the idea of amalgamating the clubs was floated. This was taken to each clubs Committee and both clubs put forward to their respective AGMs that they amalgamate to become The Eastern Hockey Club and was carried. The Club’s colours were to be Yellow, Red & Green and the emblem to be an eagle.

2004
A 3rd Women’s Team was entered into Hockey Victoria competion.

2008
A 4th Women’s Team and a 6th Men’s Team were entered into Hockey Victoria competition.
At the AGM at the end of 2008 the Committee put forward that the clubs name be changed to Knox Hockey Club. This was supported 100% by those at the AGM.

2012
At the end of 2012 the Hockey Victoria competition restructure had our Men’s and Women’s moved from State League 3 and entered into Vic League 2 competitions for 2013.

2013
A Women’s Masters Team was entered into the Hockey Victoria winter season for the 1st time.
Men’s Metro 1 South East promotion to Men’s Pennant C for 2014.

Read on below to find out all of the latest news and stories from the KHC. The Get Active Kids Voucher Program

The Get Active Kids Voucher Program helps eligible families get their kids involved in organised sport and recreation activities by reimbursing the cost of membership and registration fees, uniforms and equipment. Eligible children may be able to receive up to $200... 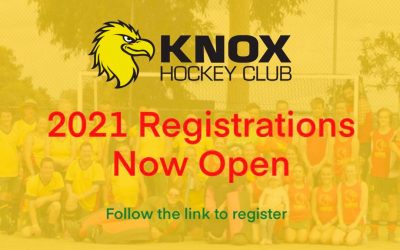 Registrations for Season 2022 are now open!

Drum roll please… After significant planning, the time has finally come to announce the most exciting news for Knox Hockey Club in 2021 (so far!). We have a vision to provide all of our members with the best possible opportunity to play and enjoy hockey at all levels... 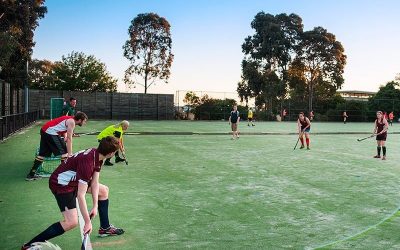 Dust off your hockey gear it's time to blow off a few cobwebs, Summer of Fun is back!! Well a shortened version anyway. For those who have not played in the Summer Comp before, the emphasis is on the “F” word: "FUN". The comp will run for the 4 Monday nights in... 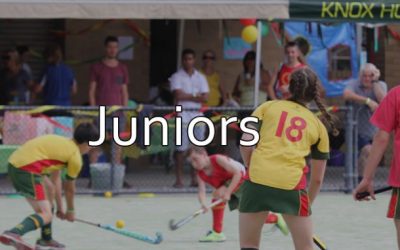 We are now taking bookings for the next session of Junior hockey training, Thursday 3rd Dec. Bookings can be made using the following linksUnder 10, Under 12 & Under 14 girlsUnder 14 boys, Under 16 & Under 18These links will remain the same each week and all...

With restrictions beginning to ease and hopefully more so this coming weekend we have updated our COVID Safe Training plans for both juniors and seniors. Please take the time to familiarise yourselves with new rules and procedures that you can read about here for...

A message from the President about new 2020 season fees - The Committee has been working hard over the past couple of weeks to finalise the fee structure for the season now that we have season dates from Hockey Victoria.  I am pleased to report that we have signed off...

We are back for season 2020 and we want more junior players. If you are keen to give hockey a go come on down, get outside and give it a go! For more information contact our Junior co-ordinator Natasha.

With the easing of restrictions this week junior training will be returning to Knox Hockey Club this week. As previously noted, Knox Hockey Club (KHC) remains committed to protecting the physical health, mental health and safety of its members – players, parents and...

Knox Hockey club are excited to announce that masters hockey training is back, as of  Monday,  25th May 2020.  currently the government restrictions only allow us to have groups of 10 at training and all social distancing rules must be adhered too.so...

Knox Hockey Club (KHC) remains committed to protecting the physical health, mental health and safety of its members – players, parents and volunteers alike. Your health is our priority moving forward, to createa fun and safe experience for everyone involved at KHC....

The 2020 winter season is coming fast. Season start date is Monday 6th April for men and 8th April for ladies. We will be running three get back into hockey sessions starting this Monday 16th April then 23rd and 30th April from 7.30pm at the club pitch. All members of...

Hockey season is just around the corner and that also means brand new opportunities for our junior members to play for the Eastern Metro Hotshots zone representative team. This event is the pinnacle junior hockey event for the winter season for all aspiring juniors in...

Hi Everyone, It is that time again… time to think about hockey 🙂We have started preseason training as mentioned in a brief post in the face book group from Troy. Training is Tuesday's at 6:45pm and Thursday's at 7:45pm. (note the change in start time, we must be...

Registrations for season 2020 are now available to complete online. Once again we are offering early bird fees for people who register before the end of Feb so get in early to take advantage of this.  This year we are offering a supporter membership for those non...